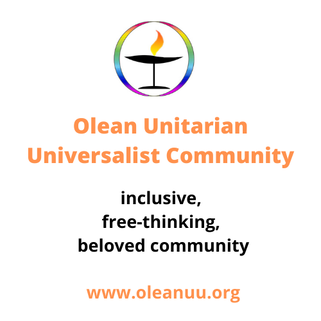 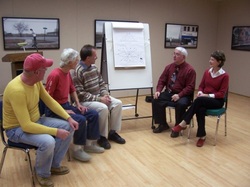 Image is of several people at a meeting at the Olean Public Library.
​Thank you Facebook!

Our story begins there in 2009, if you can believe it.  Anna Eskenazi Bush had been thinking about starting a UU in Olean when she was ready to retire, but then her friend Marcia Gallineaux-Hubert took one of those silly Facebook quizzes, "What Religion are You?"  Her result:  Unitarian Universalist.  From there, conversations about UU kept popping up everywhere, a sure sign that now was the time to start a UU.     After contacting the UU in Jamestown, and the St. Lawrence District, plans got underway to develop an Olean UU Community.  After Brian Lothridge's article in the Olean Times Herald, there were many responses, including a phone call from Daryl Johnson who has just written to UUA (the national organization) to find out how to start a UU in Olean.

With guidance from Tom Chulak, District Executive, the group began to make plans for programs to acquaint the community with UU and to see how much interest there was in starting a congregation.  Thus was born the Second Sunday Series, programs to acquaint the public with Unitarian Universalism, which began on October 11th.  The program was “A Free-Thinking Faith:  What’s in it for UU?.”  A lecture by Reverend Tim Bancroft included information about the development of all religions throughout the ages.  The lecture was followed by a group discussion led by Daryl Johnson.  Around 25 people attended the program and participated in the discussion.

The discussion showed that several of the attendees had a background with Unitarian Universalism while others were new to the faith.  Many said that even if they were familiar with UU, Rev. Bancroft gave them new information to think about.  Most attending expressed relief to have found what Reverend Bancroft described as “beloved community” in UU. “We may all start out at different points and we may all have different destinations, but as our paths cross in this lifetime, we can have beloved community,” Bancroft said.

Others made comments based on the presentation.  One woman, holding back tears, told us that she was so glad to finally have affirmation that she could be a moral person without being a theist.

The November program was, “Ecology, Justice & Compassion: Does the Earth Have Moral Rights?  An Exploration of the Interdependent Web.”  The speaker was  Richard S. Gilbert.  Dick Gilbert has been a Unitarian Universalist minister for 45 years, having retired from full time parish ministry in 2005.   Currently he is part time Social Justice Coordinator of the St. Lawrence District. He also has taught at Colgate Rochester Crozer Divinity School, Starr King School for the Ministry and Meadville Lombard Theological School. Gilbert is author of the Building Your Own Theology series, The Prophet Imperative: Social Gospel in Theory and Practice, How Much Do We Deserve? An Inquiry in Distributive Justice, and In the Holy Quiet of this Hour, a book of meditations, among other writings.

Since then we have had other speakers and also had our lay members present programs and activities.

June 2010, we were officially recognized as an emerging congregation by the St. Lawrence District.  During the summer of 2010, the group worked on forming a vision/mission statement.

January 2014, we helped organize the first of two Community Conversations on Equity and Compassion.  From this effort, a movement to create a Compassionate Community (based on a national movement) was founded.

July 31, 2017, we became affiliated with the UUA as a Covenanting Community.


Click HERE  to learn about UU History in Cattaraugus County

​We are a UU Covenanting Community.

​Acceptance as Covenanting Community by the UUA:
​ 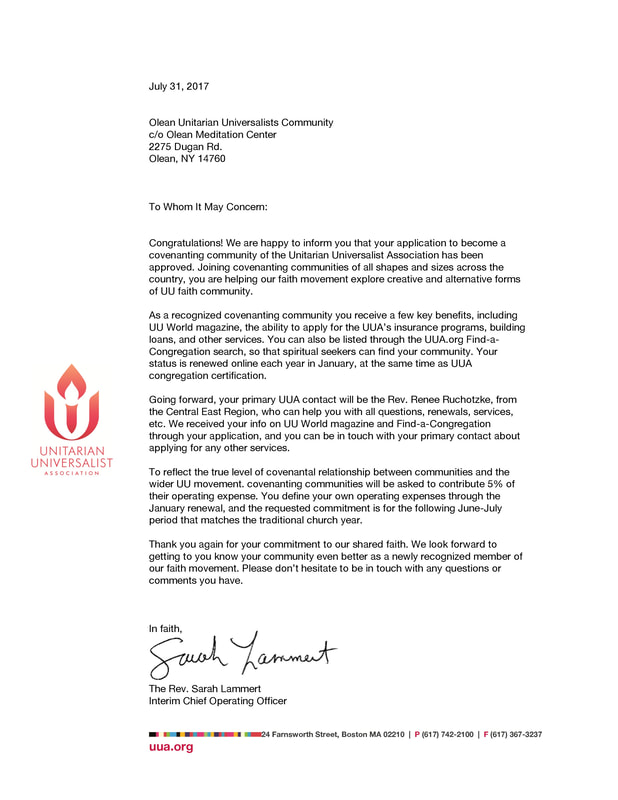 July 31, 2017 Olean Unitarian Universalists Community c/o Olean Meditation Center 2275 Dugan Rd. Olean, NY 14760 To Whom It May Concern: Congratulations! We are happy to inform you that your application to become a covenanting community of the Unitarian Universalist Association has been approved. Joining covenanting communities of all shapes and sizes across the country, you are helping our faith movement explore creative and alternative forms of UU faith community. As a recognized covenanting community you receive a few key benefits, including UU World magazine, the ability to apply for the UUA’s insurance programs, building loans, and other services. You can also be listed through the UUA.org Find-a-Congregation search, so that spiritual seekers can find your community. Your status is renewed online each year in January, at the same time as UUA congregation certification. Going forward, your primary UUA contact will be the Rev. Renee Ruchotzke, from the Central East Region, who can help you with all questions, renewals, services, etc. We received your info on UU World magazine and Find-a-Congregation through your application, and you can be in touch with your primary contact about applying for any other services. To reflect the true level of covenantal relationship between communities and the wider UU movement. covenanting communities will be asked to contribute 5% of their operating expense. You define your own operating expenses through the January renewal, and the requested commitment is for the following June-July period that matches the traditional church year. Thank you again for your commitment to our shared faith. We look forward to getting to you know your community even better as a newly recognized member of our faith movement. Please don’t hesitate to be in touch with any questions or comments you have. In faith, The Rev. Sarah Lammert Interim Chief Operating Officer 24 Farnsworth Street, Boston MA 02210 | P (617) 742-2100 | F (617) 367-3237 uua.org